Showing posts from October, 2014
Show all

Today in Drivers Obeying the Law... 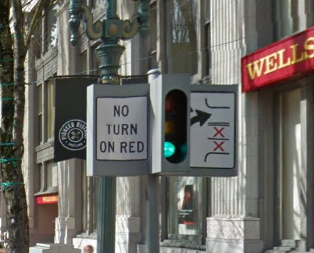 The sign says NO TURN ON RED . It very clearly indicates what lanes you are legally allowed to turn into. Naturally, the car in front of me turns, on red, into a lane in which it is not allowed. He joins a veritable parade of cars illegally blocking the transit lanes, for what purpose I cannot discern. Further up the street, a car honks at a bus pulling away from the bus stop, even though the car is breaking the law by being in a transit lane. Behind me, a train has to slow to a crawl. The trains take a full block to come to a stop, so the operator has to hit the brakes early to avoid crushing all the cars parked on the tracks. Drivers think the law is very important, which is why they always obey it.
Post a Comment
Read more

October 04, 2014
Shikha Dalmia : At any given moment, one person wants sex more passionately than the other. What's more, whether due to nurture or nature, there is usually a difference in tempo between men and women, with women generally requiring more "convincing." And someone who requires convincing is not yet in a position to offer "affirmative" much less "enthusiastic" consent. That doesn't mean that the final experience is unsatisfying—but it does mean that initially one has to be coaxed out of one's comfort zone. Affirmative consent would criminalize that. I am finding it next to impossible to read this passage in any other way than "women just need to be raped a little bit or they won't want to have sex." It is deeply, deeply creepy.
Post a Comment
Read more
More posts