The Lewis & Clark Cross-Country alums returned in force to their home course at McIver yesterday to toe the line in the biggest meet the park has ever seen. The 8k field comprised 26 teams fielding 301 athletes, the 6k field 23 teams fielding 246 athletes. Teams from all over the country were represented, as were several NCAA Division I teams including the University of Oregon, University of Portland, and Oregon State University.

The 8k started first. The pack went out fast but the alums stayed in the mix, coming through the first lap in 17th. Once the pace settled down the alums put their racing experience to good use, methodically picking people off. In the second lap they passed Clark and Corban to advance to 15th place, and in the final lap they moved past George Fox to finish in 14th, shaving 42 points off their lap 1 score. Blake Slattengren led the alums across the finish line, running a PR of 25:24 for 52nd place. Sean Richardson followed him across the line in 25:42.9. Brendy Hale, Zach Yeager, Asa Weiss, George Shoemaker, and Richie Lenne rounded out the scoring 7. The alum team placed right behind the undergrad team in 13th. Archrival Linfield Alumni, captained by Chris McIsaac, scored incomplete. 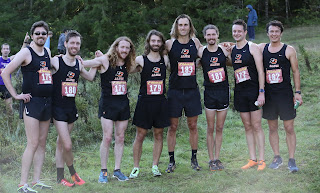 The 6k was raced 45 minutes later, led across the finish line by Amanda Phillips. Just a week after a spectacular Chicago Marathon, Amanda clinched a 2nd place finish in a time of 20:27.7—more than 40 seconds faster than her own Lewis & Clark 6k school record. She was followed by Kara Batdorff at 23:21.0 and Etta Moen at 23:28.6, both setting new 6k personal records. Heather Spurling came in soon after, just six days after her debut Boston Marathon. Katie Keith was the fifth and final finisher, picking off several competitors with a strong finishing kick. Racing just five athletes in Cross-Country leaves no room for error because there's no one to step up if one of the top five has an off day, but everyone turned in a strong performance. The alums placed 10th out of 23 teams, right ahead of the undergrad team in 11th. 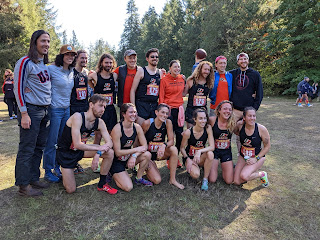 A big thank you to everyone who came out to race and to cheer, and to Coach Barreau and his staff for putting on the meet.

Popular posts from this blog

If you do not accept the theory of evolution, I will probably not change your mind. However, I hope I can convince you not to offer this as an anti-evolution argument: We have the perfect number of teeth to fit in our mouths. While creationism perfectly accounts for that result, evolutionism predicts a contrary result: As our faces evolved from chimpanzee-like faces to human faces, the shortening of the muzzle would have caused the teeth to become badly overcrowded in the front of the mouth.
Read more

Discipline is not the Issue Here

November 06, 2011
In 2004, Hillary Adams used Kazaa to download some music. Her father, an Aransas County judge, sat Hillary down to have a calm discussion about P2P networks, why much content on them is illegal, and how file sharing undercuts to earnings of struggling artists. Hillary recorded this video: My primary aim is not to condemn William Adams, though of course some judgments will creep in. Instead, I should like to talk about a wrong-headed narrative that has grown around this story. One article I read speculated that this video would set off a national dialogue about child discipline. Such a dialogue would surely be beneficial. But parental discipline is not what we see in this video, even if an unrepentant Adams couched his actions in those very terms. [I]n my mind I haven’t done anything wrong other than discipline my child after she was caught stealing, and I did lose my temper but I’ve since apologized. It looks worse than it is. (Some of you, desensitized to
Read more

XML can suck as a data format

January 09, 2010
There's a lot of hype about XML as a data format these days. Everything is supposed to be XML. This isn't such a bad idea. Any time you decide to use XML you don't need to invent your own syntax. (Side note: I think many people are confused about what XML actually is . I like to think of it as a syntax, rather than a language. When you make your own XML format, your basically inventing the semantics that go with the syntax.) Now, I think XML is great as a format for documents. I think that the combination of XML and XSLT could do a lot for achieving the kind of awesome flexibility of LaTeX while providing a stronger separation of semantics and presentation. The trouble is that XML often falls down when it comes to dealing with data (as opposed to a document). The bread and butter data structures of any programming language are sequences (variously called lists, vectors, arrays) and maps (variously called hashes, dictionaries, and associative arrays). For seria
Read more